0 Wedding Glam 05:14
A+ A-
Print Email
Whoever said Nigeria is the happiest country in the world was not far from the truth. In Nigeria, there is absolutely a reason to be merry. One of such is Marriage. Wedding in Nigeria is one of the most ceremonious occasions everybody looks forward to. Unlike what we have in the west where marriages are not a big deal and can happen at any time, anywhere or with anybody, for Nigerians, it takes a whole lot to plan and prepare for either one’s traditional marriage or what we call “the white wedding”. In all, the wedding dress is most paramount issue of all the preparations. I guess it will be right to say that in Nigeria, there is no wedding without a ‘proper ghen ghen’ wedding dress. To prove this point is the fact that wedding dresses are what most Nigerian ladies look out for in any wedding. Well, like earlier said, Nigerian weddings comes in two major ways – the traditional wedding and the white wedding and for each, different wedding dresses are worn. Here are some of the indigenous wedding dresses worn in Nigerian Weddings. One thing you will love to know about the Efik traditional attire is its distinct cultural mix. It’s quite easy to mistake an Igbo bride for an Edo bride, but when you see an Efik bride and groom, you know without a doubt. The bride wears a fancy attire known as Ofong Ukod Anwang which includes a blouse (covering only the bust) a knee-length skirt, and fancy beaded body adornment or a long flowing gown called the Onyonyo. There is also the hair pins and a decorated staff which is carried by the bride. She also wears her hand and leg gears know as Ekpa ku kwa, with her neck adorned with coral beads. The groom wears white or sometimes gold color shirts with colorful wrappers known as the Usobo. Added to this is a beaded jacket, beaded shoes and a top hat with a long piece of cloth (Okpomkpomon) which they hang around their necks.

The Ijaw/ Kalabari Wedding
The Ijaw, Kalabari bridal attire is simply breathtaking! They love to wear coral accessories, the crown and chunky coral beads. The dressing of an Ijaw man will not be complete without the bowler now better known as ‘resource control’ a hat and a walking stick. Both men and women like to complement their very rich tunics and expressive feather hats with expensive coral beads and gold.
We have several other traditions and marriage attires but I think these are the most worn in Nigerian marriages. Marriages they say are made in Heaven but celebrated here on earth. In Nigeria, marriages are sacred and should be celebrated in a more sacred manner which is the traditional way. This does not in any way negate the efficacy of the white wedding. So why not try some of these attires for your wedding?
The Yoruba Wedding Attire
The Yoruba traditional marriage ceremony even though a serious affair, is full of rich contemporary Nigerian music, graceful colors, sumptuous meals and above all somewhat funny banter. The dress of both the bride and the groom is selected with the utmost care. Aso-Oke is the Yoruba cultural attire that can not be missing in couple’s ensemble. Other fabrics such as cotton, damask, lace or even wax fabric (Ankara) can be worn on such occasion too but mostly in combination with the Aso-Oke.
The bride has a five-piece outfit made of the same color and fabrics as the groom’s. The lady wears a wide, long-sleeved blouse known as the Buba made mostly from a lace material, a wrap-around garment to be worn at the waist known as the Iro made of her prefered selected Aso-oke, a shawl or shoulder sash called the Ipele or Iborun made from the same Aso-oke as the Iro which she must drape over one shoulder as tradition demands of a bride, Gele – a scarf and finally a veil of very sheer and light material with which she will be covered until its time to unveil the bride and lets not forget matching shoes, a clutch and the glamorous feferiti
This is how the bride should Look when she first comes out. This is mostly her first look out of the many that will follow. 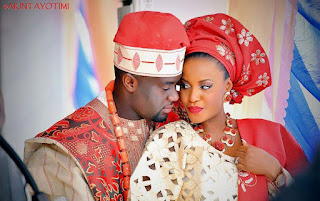 After her first look with which she is unveiled and greets the in-laws, the bride would then change into another dress which may or may not be the same with that of her husband, depending on how many change of clothes she has planned. The minimum for most people is two. Other parts of her outfit include a Necklace which can be either beads or gold chain and earrings. The colors she chooses reflect the color theme her family has chosen which also complements the groom’s outfit. The groom on the other hand will have a complete four piece outfit of Yoruba wedding attires consisting of the Agbada (a two layered material of heavy dimensions), Sokoto (loose-fitting trousers), Buba (a short loose top) and Fula (the cap).


The Igbo Wedding Attire
The Igbo traditional wedding ceremony is usually placed higher than any contemporary weddings like church or registry weddings. In fact, it is the most important marriage rites any Igbo couple should perform. Usually, the bride and groom choose to wear the same fabric (though this is not compulsory) which is usually combined with heavy embroidery, beads and bangles. For the bride’s first outing where she greets her in-laws and welcomes them with a dance, she is required to do the Ada Igbo dressing which signifies that she is yet to be married. She can choose to wear either a Nigerian wax fabric tank top, matching skirt, bold wrist bangle, large necklaces, waist beads (jigida), leg beads and an elegant bead crown on her hair. Alternatively, she can wear a blouse and wrappers accompanied with similar adornments around the neck, waist, ankles and wrists. The body is adorned in white clay, waist beads (jigida), bangles, feet and wrist chains, gold, coral beads, ear rings, necklace, wrist lets. She can also wear brass leg rings with the toes painted in traditional hues depending on the color scheme, and her hair braided or woven with a beaded crown beautifying the head. The grooms outfit can be made from brocade material, top quality lace or a fabric called jacquard or silk, it should complement the fabric chosen by his bride, and the groom usually has on a large shirts which could be sown having elaborate embroidery and animal symbolism. Some brides do the wine giving in a separate attire before changing into the color the groom is wearing.


The Hausa Wedding Attire
Hausa people are known for rich their cultures and traditions especially in the way they conduct their weddings and dress their brides. Aside the fabrics, they are known to adorn their brides with beautiful traditional tattoos using what is called Lalli. Her art is done mostly on the hands and feet. The bride who is the center of attraction for the special occasion is also not complete until her hands and legs are painted in flowery designs with locally made darkening liquid fluid known as Henna. Looking at the attire for the day, the bride ties a wrapper called abiah made with a colorful cloth with a matching blouse and shawl. She is also allowed to sew any other style she desires so long as it does not expose her body parts. On the other hand, the Groom wears a large flowing gown known as Babban riga and a robe called a jalabiya and juanni. Some men also wear colorful embroidered caps known as fullah. For the Hausa Bride and Groom, modesty is the watchword.

The Fulani traditional marriage is done in either three or two stages depending on the tribe’s requirement and preferences. The Fulani are divided along class lines and are allowed according to Islamic injunction to marry up to four wives if they so wish.

They practice endogamy marrying distant cousins as first choices before other wives and go through the three stages which is the flogging called Sharo, Koowgal a dowry payment and Kabbal. The Kabbal is an Islamic ceremony akin to marriage ceremony but without the attendance of bride or groom.

The Sharo isn’t compulsory or recognized in certain tribes while the Koowgal is the most important part of the union. The Koowgal is the handing over of a herd of cattle as dowry prior to the maiden moving in as a wife.
The traditional Islamic wedding ceremony might vary according to subgroup but have Islamic laws as a core element. Polygamy is allowed in Islamic settings so long as the man can provide adequately for the wives upkeep, majority of Fulani marriages are arranged marriages. But they also have the freedom to choose their partners especially in special occasions like the young maidens dance.

Modern Muslim weddings after the dowry has been paid and the traditional Islamic ceremony concluded in a mosque or hall they might opt for a reception if they so wish.

Edo State of the South South Nigeria has from time immemorial been a home to many ethnic groups, including Bini, Akoko-Edo and Esan. The Edo wedding attire is largely known to be one decorated with lots of beads. The Edo wedding attire worn by brides during their traditional wedding ceremony is so rich and regal. They look like true African queens in their beaded coral attires. The brides have their hair made into a unique hairstyle known as Eto-Okuku. Coral beads are then sewn into the hair or extensions in to the form of a crown, called Okuku. Many brides buy wigs ready-made with the hair and crown. They also tie beautiful wrappers made from a variety of fabrics including velvet, lace and George. Over the wrapper tied at their waist, some Edo brides wear the Ewu-ivie, a beaded cape or blouse. They also put on their necks with coral beads known as Ivie-uru and wear the Ivie-obo on their hands. To complete the regal traditional Edo wedding look, brides wear beaded earring. The man had a loin cloth for ordinary wear and three pieces sewn together known as igbu or male coverlet. This would give a total of four pieces on the minimum of loin cloth needed by every male.